Realms of Imagination is Now Available in Hardcover and Trade Paperback! 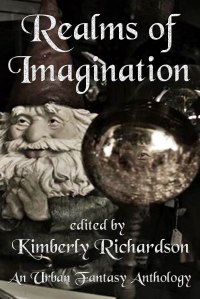 I’m excited to announce that Realms of Imagination urban fantasy anthology edited by Kimberly Richardson and published by Dark Oak Press and Media is finally available in hardcover and trade paperback! This anthology contains one of my stories, “The White Rider,” that takes place in The Elysian Chronicles universe between Out of the Shadows and Book III.

I’ve hinted that this story foreshadows a couple plot twists that will occur in Book III, but I never actually explained what it’s about. So here is a little bit of a description. 🙂

Meet Peter O’Reilly: a narcissist intent on climbing the corporate ladder. He keeps his life well under control, starting with his OCD morning routine:

I showered and shaved by 6:15. I added some gel to my dark-brown hair and ran a brush through it. I put on a pair of grey dress pants and a starched, white shirt. (The starch helped stiffen the shirt, camouflaging my slender frame.) I searched through my tie collection. I had an important meeting this morning, and I wanted to convey power. I chose a red one. I added gold cuff links, a present to myself for graduating from Princeton University, as a final touch. I believed in dressing for the position you wanted, and I was sure the President of the United States wore cuff links. …

Peter has his own moral code:

“Preparedness is a virtue,” [I said]. I had no use for patience.

One thing is for sure, Peter doesn’t need any help from others. He’s going to succeed on his own:

Angel statues in general annoyed me. I felt as though they were watching me no matter where I stood. Others might find that comforting, but not me. I hated it when people searched for help from some outside, spiritual source instead of solving their own problems. Live for yourself was my motto. Take control of your own life and quit waiting on some power to help you out.

All that changes Peter gets inducted into a secret society of powerful, wealthy individuals. He thinks it’s his ticket to success. In actuality, the society is a front for evil he never believed was possible. Now Peter must choose between good and evil, and he comes to the realization that he can’t get out alive without help.

Click here to reach Dark Oak’s Realms of Imagination page, which has links to all major booksellers near the bottom left hand corner.

Be sure to join in the discussion at M. B. Weston’s Treetop Inn group on Facebook!

Fantasy, steampunk, and paranormal novelist M. B. Weston is the author of The Elysian Chronicles, a fantasy series about guardian angel warfare and treason. Weston is also the hose of The Final Cut In Movies radio show that airs on TMV Cafe Monday nights at 8:00 EST. For more information on M. B. Weston, visit www.mbweston.com. To receive notification of M. B. Weston’s book releases click here to subscribe to Dark Oak Press & Media’s e-newsletter.

M. B. Weston is an award-winning fantasy, pulp, young adult, steampunk, and paranormal author. Her attention to procedure and detail gives her works an authentic gritty, military feel that takes an adventure tale to the level of a true page-turner. Weston’s writing attracts both fantasy and non-fantasy readers, and her audience ranges from upper-elementary students to adults. A gifted orator, Weston has been invited as a guest speaker to numerous writing and science fiction/fantasy panels at conventions across the US, including DragonCon, BabelCon, NecronomiCon, and Alabama Phoenix Festival. She has served on panels with such authors as Sherrilyn Kenyon, J. F. Lewis, Todd McCaffrey, and Jonathan Maberry. Weston has spoken to thousands of students and adults about the craft of writing and has been invited as the keynote speaker at youth camps and at several schools throughout the US.
View all posts by M. B. Weston →
This entry was posted in Books & Works by M. B. Weston, News & Events, Short Stories & Other Writings, The Elysian Chronicles and tagged angel, author, Dark Oak Press, Elysian Chronicles, fantasy, guardian angel, Kimberly Richardson, M. B. Weston, movies, paranormal, radio, Realms of Imagination, steampunk, Treetop Inn, urban fantasy, warfare. Bookmark the permalink.