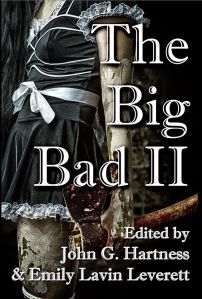 As of today, I am a published horror author! My short story, “The Witch Hunter,” has just been released in The Big Bad II, edited by John Hartness and Emily Leverett. It’s an anthology written from the the point of view of the villain, and my story was part of the inspiration for the cover!

Here’s the “official” description: Everybody loves the bad guys, and this second edition of The Big Bad brings you more to love! A collection of best-selling fantasy and horror writers brings you twenty-four all-new tales of vampires, demons, ghosts, zombies, and the most terrifying monsters of all – humans. Crack open the pages, if you dare, and explore two dozen tales of humor and horror by some of the brightest names in the business!

As of earlier today, it was number 6 on amazon for horror anthologies!

If you have been keeping up with my writing diary posts, you know that I am knee-deep in writing an urban fantasy, pulp novella about a witch hunter named Michael Lodestone. Here’s a little secret: Mr. Lodestone is the witch hunter in this story, which takes place right after the novella I’m writing. It will give you a little sneak peek at where I’m going… kind of…

Here are the links:

If you are coming to ConNooga, be sure to stop by:

M. B. Weston is an award-winning fantasy, pulp, young adult, steampunk, and paranormal author. Her attention to procedure and detail gives her works an authentic gritty, military feel that takes an adventure tale to the level of a true page-turner. Weston’s writing attracts both fantasy and non-fantasy readers, and her audience ranges from upper-elementary students to adults. A gifted orator, Weston has been invited as a guest speaker to numerous writing and science fiction/fantasy panels at conventions across the US, including DragonCon, BabelCon, NecronomiCon, and Alabama Phoenix Festival. She has served on panels with such authors as Sherrilyn Kenyon, J. F. Lewis, Todd McCaffrey, and Jonathan Maberry. Weston has spoken to thousands of students and adults about the craft of writing and has been invited as the keynote speaker at youth camps and at several schools throughout the US.
View all posts by M. B. Weston →
This entry was posted in Books & Works by M. B. Weston, Short Stories & Other Writings. Bookmark the permalink.