The Writer’s Panacea: A Review of Starbucks’ Molten Chocolate Latte 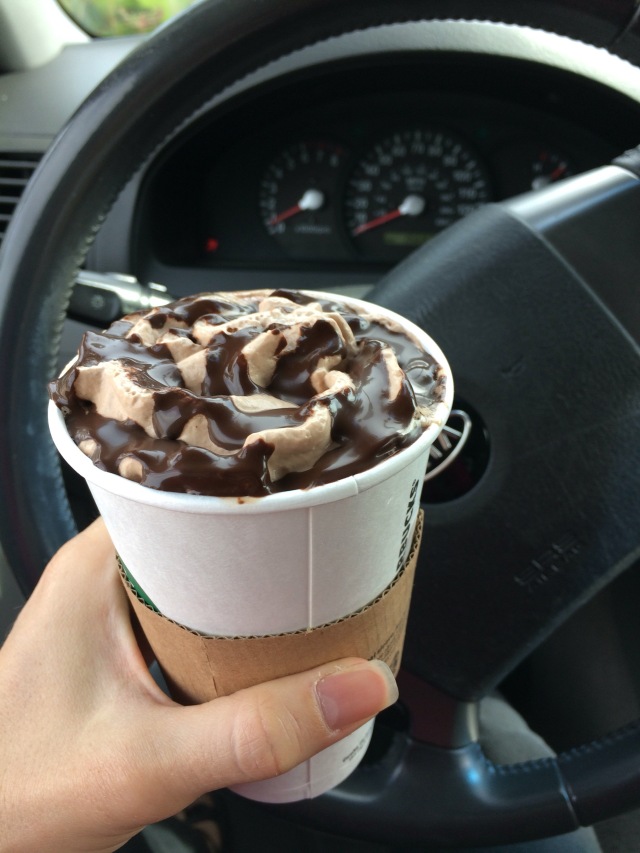 Some writers use different types of music to help them write; I use the caffinated beverage, which varies depending on the situation. A latte fills me up and give me a kick when I’m working my table at a convention. Harney & Son’s Hot Cinamon Sunset Tea makes my bad days feel good and helps with action scenes. A mocha makes me stop hating the world on an ultra-bad day, which is useful when my words need a lighthearted tone. Earl Grey makes me feel like a writer and helps me get down to business.

You can imagine how my chocolate-craving heart leapt when I saw the ad for Starbucks’ Molten Chocolate Latte, available only from February 8th through 14th. This drink, I thought, could surely be one of the perfect concoctions to help jumpstart a writer needing a shot of “get going on that manuscript” in the arm. I decided to try it and post a review here.

To understand the Molten Chocolate Latte, you must first understand the basic mocha and how it is made. (I once worked as the manager for a coffee shop, so I am initimately familiar with this process.) The barista first mixes a shot of espresso (or two or three depending on the size of the drink) with chocolate syrup by swirling it around in the cup until the chocolate syrup has melted and the mixture is evenly distributed. (As in, no chocolate syrup is stuck to the bottom of the cup. If the chocolate syrup and espresso are still separate from each other, you’re not done mixing.) Then the barista pours steamed milk into the espresso-syrup mixture and tops it with whipped cream. (Chocolate drizzle is optional.)

The Molten Chocolate Latte is similar to a mocha, but with a few extra ingredients. (I found these in this article at bustle.com):

That is a heck of a lot more chocolate and coffee than a normal mocha, and it definitely has potential to put a writer into bliss at least for a while. (We writers are a grumpy bunch.)

Once I received my latte at the Starbucks drive through, I found a parking space. I wanted to judge the drink as though I was in the coffee shop instead of putting it in my cup holder and driving home, leaving the whipped cream to melt and the foam to separate from the milk. (But I don’t obsess over my coffe or anything…) If course, trying to savor a coffee beverage with my dog whining in the car and my two-month-old crying in the back seat is not exactly the Starbucks experience either…

Obviously, the first few sips were bliss. Seriously, chocolate mocha infused whipped cream drizzled with chocolate… No one could screw that up.

Once the whipped was gone, however, the rest of the drink tasted just like a regular mocha. I was expecting much more chocolate flavor in the actual drink. I couldn’t figure out why until I reached the last few sips, which were basically chunks of half-melted chocolate chips. (See the pic on the right.) Then I realized that adding the chocolate chips to the espresso-chocolate-syrup mixture made it hard to mix completely. I decided to try again a day later, but encountered the same problem. Here is the weird thing. Despite my frustrations with the chocolate chips not being mixed well and the actual drink tasting like a regular mocha, I am finding myself craving another one of these. I think it’s the chocolate whipped cream with the chocolate drizzle.

My advice: if you get the Molten Chocolate Latte, let it sit for a few minutes–but just a few. The whipped cream will melt a bit into the drink, and the chocolate chips will have time to melt. And swirl the liquid a bit in the cup as you drink. (Pretend it’s a red wine.) This will help melt the chocolate chips, it feels good, and makes you feel like a writer.

Oh yeah, and bring along a romance scene that needs work.

M. B. Weston is an award-winning fantasy, pulp, young adult, steampunk, and paranormal author. Her attention to procedure and detail gives her works an authentic gritty, military feel that takes an adventure tale to the level of a true page-turner. Weston’s writing attracts both fantasy and non-fantasy readers, and her audience ranges from upper-elementary students to adults. A gifted orator, Weston has been invited as a guest speaker to numerous writing and science fiction/fantasy panels at conventions across the US, including DragonCon, BabelCon, NecronomiCon, and Alabama Phoenix Festival. She has served on panels with such authors as Sherrilyn Kenyon, J. F. Lewis, Todd McCaffrey, and Jonathan Maberry. Weston has spoken to thousands of students and adults about the craft of writing and has been invited as the keynote speaker at youth camps and at several schools throughout the US.
View all posts by M. B. Weston →
This entry was posted in M. B. Weston's Writing Diary, Random Musings and tagged molten chocolate latte, Starbucks, Writer, writinf, writing. Bookmark the permalink.