Sample Sunday: Read a bit of an Elysian Chronicles short story, “The Cherubian, The Lindworm & the Portal” 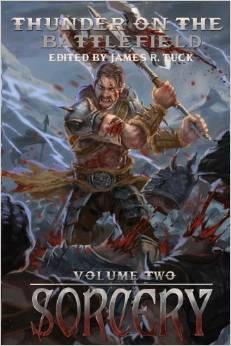 Though this story has been out for over a year, I haven’t really publicized it the way I should have. This is an Elysian Chronicles story takes place before A Prophecy Forgotten. Its a story about Davian and Eric before they were officers, and its the first military battle that sets Davian apart as a legendary warrior.

Davian and his RSO (special ops) unit are trying to save a small military outpost from mornacht attack when they soon discover they are being tracked by a lindworm–a dragon that spits sound waves instead of fire–that wants to destroy the outpost as well.

The short story is in Thunder on the Battlefield: Sorcery, edited by James R. Tuck.

You can read the beginning of the story here. Today I wanted to include a part with a bit more action, however:

Davian arrived at the wall next to Eric and shot, providing cover fire for three soldiers making their way up the side of mountain. It did no good. One by one the soldiers fell. Mornachts converged on them, breaking their wings and stabbing them with spears.

He took aim in a rage.

Davian lowered the bow and eyed the captain. Something besides their predicament worried Thorne.

Thorne motioned for Davian to join him. “You rigged the trebuchet?”

“Good. We have a decoy. Kieran! Where’s the runt?”

Kieran popped next to them. “Here sir?”

Thorne pointed to the trebuchet. “Can you see Davian’s rigging?”

Thorne took Kieran by the shoulders and pointed him in the direction of a rock that would give him cover. “I need you to get up there and hit it with one of those crystal-tipped arrows—the new ones that will generate a spark.”

The young archer saluted and hopped on the rock.

Kieran lay flat to conceal himself from the mornachts. “It’s all in the wind, sir. If I—”

While Kieran took aim, Thorne knelt next to Dane’s body. He reached around the lieutenant’s neck and pulled a clear crystal attached to a chain out from under his breastplate. He tossed it to Davian. “You’re next in command.”

“Yes sir.” The words stuck in his throat. He stared at the thumb-sized crystal in his hand. It was a command crystal—the sign of an officer. While he had always dreamed of such a promotion, he knew this was temporary. He also felt unprepared. His knowledge consisted of distances, timing, explosives, and killing—not leading or strategy. He swallowed and hung the crystal around his neck, hiding it in his breastplate. He took his bow and returned to the wall next to Eric, sure the color had drained from his face.

Eric flashed a sarcastic snarl at him. “Just remember, if we get caught, they’ll be interrogating you first.”

“How many do we have out there?” Thorne asked.

No one replied. Eric elbowed Davian in the side.

Davian’s thoughts raced. “We have ten in here.” He said it out loud, fearing silence might frustrate the captain. “Lieutenant Dane and Zedric are down. Those three out there are down. Ten alive. Five down. That’s fifteen unaccounted for.”

Kieran remained quiet. Davian knew he was concentrating on the swirling wind, waiting for the best time to release the arrow.

A thin black shape streaked through the air with the sharp TWANG! of a released bowstring.

Kieran’s arrow struck the center of the explosive. A boom thundered across the battlefield. The counterweight fell, crashing to the ground, crushing four mornachts under it.

Kieran dropped next to Davian and Eric, looking pleased with himself.

Six cherubians still trapped in battle seized the opportunity to escape into the air. Arrows screamed after them, plucking all but one out of the sky before they could reach safety. Their bodies careened to the ground and crashed against the rocks.

“Let’s hope the others make it,” said Thorne.

The ground quaked again. Thorne, who never showed fear, cast a worried look at the woods.

“Something’s out there, sir,” said Davian.

“You’ve noticed too, then.” The captain remained silent for a moment. “We need to get to that tower.”

A gust of wind swirled, knocking them, and the mornachts who approached, on their backs.

Davian pushed himself up, dazed. He had never encountered wind currents like these.

“Look out!” Eric grabbed him from behind and pulled him back. A cherubian fell from the sky and crashed where Davian had been sitting.

The soldiers in the alcove stared at the soldier’s contorted body in horror. His wings were still intact and unbroken. Few cherubians ever lost control during flight.

“His ears are bleeding,” said another.

The captain pulled Davian aside. “If anything happens to me, you’re in command. Take my pack. Our orders are in there.”

Davian raised his eyebrows. “I thought our orders were to protect the tower until Salla’s forces arrived.”

Thorne lowered his voice. “The tower is guarding an uncharted portal.”

Magnetic fields that created potential portals linking their dimension of Heaven’s Realm to Earth filled the Southern Front. The mornachts hated humans and wanted control of anything that made access to Earth easier. Cherubians, charged with guarding humans, needed to protect any portal they could find.

“That explains why this outpost is in such a horrible location.” Questions filled Davian’s mind, and he wondered how much he dared ask. “Why is this portal uncharted?”

“It’s guarding something more important than a simple passage to Earth. Whatever happens, we can’t let the scabs take that portal. We will destroy it if we have to. Do you understand?”

“Yes sir.” He stared hard at the captain, trying to figure out what he had left out. “What’s in the forest, sir?”

“Scabs aren’t the only creatures in this dimension who want to return to earth. But if we reach the tower, it won’t matter.”

Before he could continue, a swarm of mornachts rushed up the rocks toward them from each side of the valley. Thorne pointed at four of the nearest soldiers. “You four are with me. Davian, take the others. Keep the scabs out of our back door!”

Davian stood in front of men who were still his peers. “Let’s take them.” It sounded silly and uncommanding, but he didn’t know what else to say.

Action, he decided, would be more powerful than any more of his words. He pulled out his bow, grasped the rocks above, and heaved himself up. He crouched behind a boulder and began shooting at the mornachts. The others followed his example.

They held the Morvenian forces back.

The others had either two or three arrows left. Davian reached in his own quiver.

He stored his bow and took out his sword, preparing for the mornachts and wolves headed toward them.

They poured over the rim of the rocks.

He beheaded one and stabbed another, pushing their bodies down the hill to Thorne. “Make them useful!”

Once the bodies started to steam, Thorne and Kieran launched them down the hill at oncoming mornachts. The explosions stopped the onslaught for a precious few seconds.

The mornachts forced Davian and the soldiers with him down the hill until they fought back to back with Thorne.

Davian heard a low growl to his left. Two Morvenian wolves crouched, glaring at him with uncaring eyes that glowed against their black fur. Their hair stood on end, and they bared their blood-stained fangs. They sprang at Davian, their howls splitting the air.

He kicked one to the side, stabbing the other in the chest mid-leap. Davian ducked, pulling his sword out of the beast’s body as it fell to the ground. The other wolf jumped, knocking him to the ground. He rammed his sword hilt into its temple. He thrust the wolf off, stood up, and finished it properly, separating its head from its body with one swing.

Sweat and blood flew through the air as the soldiers around Davian engaged in their own battles. Eric grabbed his shoulder and pointed at some mornachts who were pushing a boulder down the hill directly at them. Davian grasped Thorne’s arm to pull him out of the way. He lost his grip on the captain’s sweaty limbs. Davian fell back and watched the boulder roll past him.

Dirt, moss, and shards of rock burst out around him. He opened his eyes. Kieran, stunned, blinked as he struggled to sit up. Eric stared open-mouthed at Thorne, who didn’t budge.

Davian leapt to his feet and landed next to the captain. His once square jaw had crumpled, and cold, empty eyes stared lifelessly at the sky. Davian closed Thorne’s eyes and crossed his fist over his chest in salute. “Godspeed and safe journey, Captain.”

He peered over the rock. Twenty mornachts swarmed toward them, converging on them from the front and back. The soldiers looked to him, unsure of the next course of action. Of the ten, only six, including himself, were left….

Read more about Davian and more sword and sorcery stories in Thunder on the Battlefield.

M. B. Weston is an award-winning fantasy, pulp, young adult, steampunk, and paranormal author. Her attention to procedure and detail gives her works an authentic gritty, military feel that takes an adventure tale to the level of a true page-turner. Weston’s writing attracts both fantasy and non-fantasy readers, and her audience ranges from upper-elementary students to adults. A gifted orator, Weston has been invited as a guest speaker to numerous writing and science fiction/fantasy panels at conventions across the US, including DragonCon, BabelCon, NecronomiCon, and Alabama Phoenix Festival. She has served on panels with such authors as Sherrilyn Kenyon, J. F. Lewis, Todd McCaffrey, and Jonathan Maberry. Weston has spoken to thousands of students and adults about the craft of writing and has been invited as the keynote speaker at youth camps and at several schools throughout the US.
View all posts by M. B. Weston →
This entry was posted in Books & Works by M. B. Weston, Short Stories & Other Writings, The Elysian Chronicles and tagged A Prophecy Forgotten, dragon, dragons, Elysian Chronicles, fantasy, James R. Tuck, lindworm, M. B. Weston, portal, sample chapters, sword and sorcery. Bookmark the permalink.