Sample Sunday: Part of Chapter 30 from The Elysian Chronicles: A Prophecy Forgotten 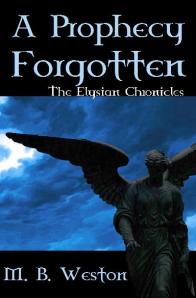 It turns out that several authors post samples of their books on Sunday. (It’s called #samplesunday in the twitter-verse.) I’ve decided to join in!

My first sample comes from Chapter 30 in my first published book, The Elysian Chronicles: A Prophecy Forgotten.

Because this is fantasy, I needed to create names, creatures, weapons, and military divisions. Here are a few terms specific to the Elysian Chronicles:

(If you have been keeping up with my blog posts on writing and Making Make-Believe Believable, the “bottle bomb” that Davian makes is reminiscent of a Molotov cocktail, and is an illustration of using a hybrid of modern technology and fantasy/science fiction technology to surround your unbelievable story elements with the believable (click here for the post). For the full list of posts in these series, click here or on the category called “Making Make-Believe Believable.”)

The Elysian Chronicles: A Prophecy Forgotten

Chapter Thirty: The Third Battle for the City of Ezzer 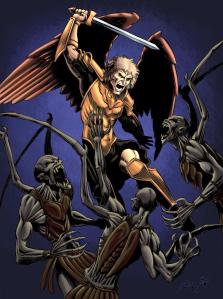 Davian crouched on a branch that hung over the city’s southern wall and seized a brief opportunity to take off his helmet and wipe his head. He had taken Marcus, Tyce, and Theo outside the city to plant explosives, and then planted all the RSOs in the trees around the southern wall. Davian replaced his helmet and stared at the army through his spyglass. Mornachts, wolves, and sabers filled the southern fields.

“Those fields are going to smell for weeks,” Marcus replied.

Davian turned to Theo. “Got any explosive-tipped arrows?”

Theo checked his supply and smiled. “At least twenty-five, sir.”

Davian peeked at Theo’s ammunition supply and sighed with relief. No poisonwood arrows. “They’ve brought sabers, boy, and sabers can climb trees. If these walls don’t hold, the kitties will ravage the city. Save your explosive tipped arrows for the sabers.”

Davian watched the command bunker until Zephor gave him the signal. “Now,” he said to Theo, and he aimed his crossbow at the young archer in case Theo decided to shirk orders.

Theo proved trustworthy. All but two of the bombs detonated and killed most of the mornachts on the front line. Their bodies exploded just as the secondary lines rushed forward. The tally? Theo’s shots eliminated over five hordes.

And thus began the Third Battle for the City of Ezzer.

The RSOs in the trees killed most of the mornachts that tried to climb the wall with crossbows and sunstars while the archers eliminated commanders and generals on the ground. Davian looked across the Morvenian camp and saw what looked like a long line of lit torches.

“They’ve got fire!” he yelled, an instant before ducking behind a branch just as hundreds of flaming arrows soared over the wall and into the trees.

The fighting continued amidst the flames and smoke until Davian stopped and sniffed. “Marcus!” He gave him an exaggerated sniff.

Marcus gave Davian a confused look and shrugged. “Sir, that’s the sewage plant—and the mornachts out there—and the fire you smell.”

“No, Marcus. They’re here. I don’t know how, but they’ve breached the wall, and they’re inside.”

Suddenly, they heard a yell in a tree—but not a tree on the southern lines. It came from the homes and shops where many of the civilians were hiding. More followed.

Davian grabbed Marcus, and pointed to the shadows that moved in the branches from tree to tree, into and out of homes. “I’ll bet you anything that they’re coming through one of the canafs!” He whistled to the RSOs in the trees and signaled to them to join him. “What was I thinking? They didn’t sabotage the sewage system to keep us from smelling the oncoming army. They sabotaged it to keep us from smelling the scabs once they entered the city!”

Tyce, Theo, and twenty other RSOs joined Davian and Marcus. “Infiltrators!” Davian yelled over the noise. “Inside the walls!” He pointed to the moving shadows in the trees. “Archers, get high: there, and there! The rest of you, we take cover in the trees and take them out. Don’t let them reach the soldiers at the wall! Go! Go!”

The RSOs flew high and melted into the trees. Soon, the screams of civilians were mixed with the shrieks and explosions of mornachts.

Davian and Marcus chased a mornacht into a house. “How many do you think are here, sir?” Marcus yelled as he jumped on one before it could stab a young cherubian girl. Marcus twisted its neck and threw it aside.

“Don’t know.” Davian glanced out a window and shot a mornacht that was climbing the tree trunk. “At least a horde! Probably more!”

He saw another large group of mornachts sneaking up on a shelter in a nearby tree. He grabbed a bottle off of a shelf, jumped on top of the dead mornacht, and cut its throat.

“Ten are sneaking toward another shelter, Marcus!” he said as he filled the bottle with the mornacht’s blood. “Wait for my signal!”

He looked at the mornacht on the floor. Hot steam began to seep out its nose.

Steam started spewing out of its armor like a mad teakettle.

A spark flew off its body.

“Now!” Davian threw the bottle at the sneaking mornachts, and it exploded just before he and Marcus jumped in to finish the job.

Davian felt a sharp pain in his left arm, as though someone had injected him with acid. A poisonwood arrow had grazed him…

Continued in The Elysian Chronicles: A Prophecy Forgotten.

For 10 sample chapters of A Prophecy Forgotten, click here.

M. B. Weston is an award-winning fantasy, pulp, young adult, steampunk, and paranormal author. Her attention to procedure and detail gives her works an authentic gritty, military feel that takes an adventure tale to the level of a true page-turner. Weston’s writing attracts both fantasy and non-fantasy readers, and her audience ranges from upper-elementary students to adults. A gifted orator, Weston has been invited as a guest speaker to numerous writing and science fiction/fantasy panels at conventions across the US, including DragonCon, BabelCon, NecronomiCon, and Alabama Phoenix Festival. She has served on panels with such authors as Sherrilyn Kenyon, J. F. Lewis, Todd McCaffrey, and Jonathan Maberry. Weston has spoken to thousands of students and adults about the craft of writing and has been invited as the keynote speaker at youth camps and at several schools throughout the US.
View all posts by M. B. Weston →
This entry was posted in Books & Works by M. B. Weston, The Elysian Chronicles and tagged #samplesunday, A Prophecy Forgotten, angel, author, comic books, Elysian Chronicles, fantasy, guardian angel, horror, M. B. Weston, paranormal, publishing, sample chapter, Sample Sunday, science fiction, speaker, steampunk, warfare, writing, Writing Believable Make-Believe. Bookmark the permalink.

2 Responses to Sample Sunday: Part of Chapter 30 from The Elysian Chronicles: A Prophecy Forgotten